Skipton’s reputation as a happening place goes back a long way!

The two flags flying throughout Skipton during 2015 were the mediaeval royal standard and the shield of William de Forz. 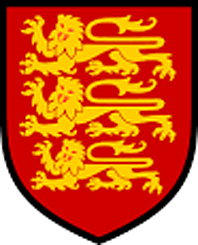 William de Forz (or Fortibus) was a Frenchman, the Count of Aumale. He came to England in 1214, probably from Poitou. He was able to inherit his title to the Earldom of Albemarle from his mother, whose father William le Gros had been the 1st Earl of Albemarle. With the title he also inherited his mother’s lands on condition he married Aveline, the daughter of Richard de Montfichet. In the north of England these estates included the wapentake of Holderness, the castle of Skipsea, and the Honour of Skipton.

De Forz joined the baronial opposition to King John in the spring of 1215, almost certainly at his father-in–law’s behest – both men were among the 25 barons described in Clause 61 of Magna Carta whose task was to check up on the King and ensure that he was sticking to the agreements of the Great Charter.

By August 1215, however, he had rejoined King John, taking part with the royal army in the punitive expedition in the north of England. But when the tide began to turn against the king once more, he deserted John in June 1216, joining the winning side again.

He returned to royal service after the accession of Henry III, backing the re-issue of Magna Carta, and fighting for the new king at the Siege of Mountsorrel and the Battle of Lincoln. However, the Regency Council demanded that he return royal lands acquired from the Crown during the rebellion, most of which he had relinquished by 1220.

By the end of 1220, he rebelled against the Regency Council for not promoting him to the important office of Seneschal of Poitou and Gascony. With his record as a turncoat, however, it is hardly surprising that he failed to get his request. He fled north to escape retribution, taking refuge at Fountains Abbey.

He was subsequently pardoned, and treated leniently, allowed to return to the King’s service. He was in fact used as a royal messenger, for example, to the Holy Roman Empire.

Considering William’s unreliability in allegiance, and the apparent lack of principle in his behaviour, he seems to have been remarkably lucky not only to survive the turbulent events of the period, but also to rescue his career as a royal servant.